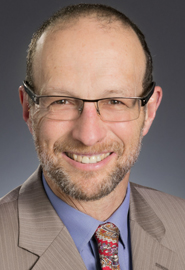 Clifford Rechtschaffen was appointed to the California Public Utilities Commission by Governor Jerry Brown in January 2017. At the CPUC his key areas of interest include decarbonization, safety, environmental justice, enforcement, and improving the accessibility of Commission proceedings. Commissioner Rechtschaffen is the assigned Commissioner on the integrated resource planning, transportation electrification, building electrification, Renewables Portfolio Standard, biomethane and renewable gas, supplier diversity, and several risk assessment and safety proceedings. He also co-leads several internal agency initiatives, including implementation of the Commission's Environmental and Social Justice Action Plan, implementation of the Commission’s enforcement policy, and efforts to make CPUC proceedings more streamlined and accessible to the public. Commissioner Rechtschaffen serves as one of two Commissioners on the Senate Bill 350 Disadvantaged Communities Advisory Group, is a member of the Western Energy Imbalance Market Body of State Regulators, and is on advisory board of the California Stationary Fuel Cell Collaborative and the Financial Research Institute.

Prior to joining the CPUC, Commissioner Rechtschaffen served as a senior advisor to Governor Brown from 2011 to 2017, where he worked on climate, energy, and environmental issues. In 2011 he also served as acting director of the California Department of Conservation. Commissioner Rechtschaffen served as a special assistant attorney general in the California Attorney General's Office from 2007 to 2010. From 1993 to 2007, he taught environmental law, directed the environmental law program, and co-founded the Environmental Law and Justice Clinic at Golden Gate University School of Law. In 2005, he was a Fulbright Scholar at the University of Ljubljana in Slovenia. He is the author of several books and numerous articles on environmental law and policy. He was a deputy attorney general in the Environment Section of the California Attorney General's Office from 1986 to 1993, a Reginald Heber Smith Community Lawyer Fellow at the Marin County Legal Aid Foundation from 1985 to 1986, and a law clerk for the Honorable Thelton Henderson, U.S. District Court, Northern District of California, from 1984 to 1985. He is a graduate of Yale Law School and Princeton University. He lives in Oakland and is a diehard Golden State Warriors fan.