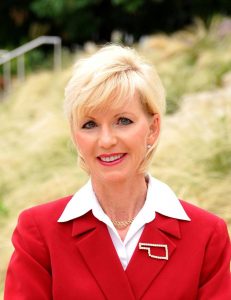 Born in Woodward, Oklahoma, Commissioner Murphy is a fifth-generation Oklahoman deeply committed to her home state. After attending Central State University in Edmond, Oklahoma, where she received the Best All-Around Freshman Athlete award, she attended Oklahoma State University (OSU) and graduated in the top ten percent of her class with a bachelor’s degree in geology. After practicing as a geologist for ten years, she obtained her law degree cum laude while working and attending night school at Oklahoma City University. On November 4, 2008, she was first elected to the statewide office of Oklahoma Corporation Commissioner for a partial two-year term. On July 27, 2010, she was re-elected to a full six-year term. She previously served as Chairman from January 3, 2011 through July 31, 2012 and February 1, 2017 through March 31, 2019.

Commissioner Murphy's prior experience includes serving for almost six years as an administrative law judge at the Commission, where she was named co-employee of the year for 1997 and received the Commissioners’ Public Servant Award in 2001. She has more than 22-years experience in the petroleum industry including owning and operating a private law firm focused on oil and gas title, regulatory practice and transactional work and working as a geologist.

Commissioner Murphy is a member of the National Association of Regulatory Utility Commissioners (NARUC), where she serves on the Electricity Committee. She is a member of the Electric Power Research Institute (EPRI) Advisory Council. She is the Oklahoma member of the Regional State Committee of Southwest Power Pool. She also serves on the Oklahoma Water Resources Research Institute Advisory Board, serves on the advisory board of the Financial Research Institute, and is a member of the Oklahoma Bar Association, American Association of Petroleum Geologists, Oklahoma City Geological Society and Oklahoma Women’s Coalition. In March 2007, Commissioner Murphy was recognized as an outstanding woman in energy by Energy Advocates. In 2010 she was recognized for dedicated service by the National Association of Royalty Owners and in 2011 received the Friends of Agriculture Cooperatives Award. She is also a recipient of the University of Central Oklahoma Distinguished Alumni Award for 2012. She previously served as a trustee and a care chaplain for the Church of the Servant United Methodist Church in Oklahoma City. She also serves as a member of the Salvation Army’s Central Oklahoma Area Command Advisory Board.

Prior to joining the Commission, she was a member of the board of directors of Farmers Royalty Company and a member of the Edmond Chamber of Commerce. She is also a part-time personal fitness trainer. Commissioner Murphy lives in Edmond, Oklahoma, but continues to be actively involved with her family’s farm and ranch in Ellis County, Oklahoma.