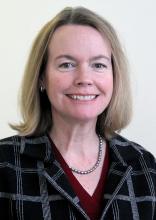 
Office of Consumer Advocate of Iowa

Jennifer Easler has been an attorney in the Office of Consumer Advocate since 1996 and served as interim director from June 2010 until January 2011. She has represented the public consumer sector in transmission matters at the Midcontinent Independent System Operator and the Federal Energy Regulatory Commission, and served as the consumer advocate representative and chair of the Iowa Energy Center Advisory Council.

Easler co-chairs the Electric Committee for the National Association of State Utility Consumer Advocates. She served on the executive committee of the State Energy Efficiency Action Network facilitated by the U.S. Department of Energy and U.S. Environmental Protection Agency from 2010 to 2016, and she received the Midwest Energy Efficiency Alliance Leadership Award.

She has a bachelor’s in finance from the University of Iowa and a law degree from Drake University.