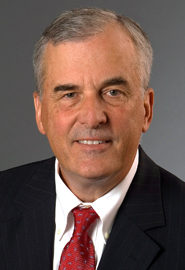 Richard Lozier was appointed to the Iowa Utilities Board and began his service on May 1, 2017, for a term that runs through April 30, 2023.  Prior to joining the Board he was a member of the Belin McCormick law firm in Des Moines for over 20 years.  During much of that time, a major component of his practice involved regulated utilities, including telecommunications, wind energy development, electric transmission, water, and gas and oil pipelines.

After graduating from law school he was a Special Agent for the Federal Bureau of Investigation in Albuquerque, NM and Los Angeles, CA before returning to Des Moines to practice law.  He practiced with the Grant, Lozier & Sarcone firm in Des Moines before joining the Belin McCormick firm.

He resides in Des Moines with his wife Kaye, and they have 5 adult children and 10 grandchildren.