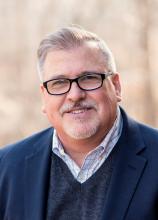 David Springe is the Executive Director of the National Association of State Utility Consumer Advocates (NASUCA). NASUCA’s 59 member offices represent the interests of utility consumers in 44 states, the District of Columbia, Barbados, Puerto Rico, and Jamaica.

Prior to assuming his duties at NASUCA, Mr. Springe served for thirteen years as Consumer Counsel for the Kansas Citizens’ Utility Ratepayer Board (CURB) and spent nine years as an economist and expert witness for both CURB and the Kansas Corporation Commission. Mr. Springe received his M.A. in Economics and Juris Doctor from the University of Kansas. Mr. Springe served as President of NASUCA from 2007-2009 and continues to represent consumer interests on numerous advisory boards.