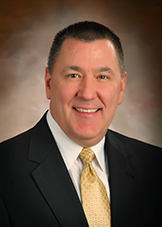 Robert joined Louisville Gas & Electric in 1987 as an electrical engineer in Distribution Planning and moved to Generation Planning in 1991. He held various analyst and management positions in generation including promotions to Group Leader, Generation Planning, in 2000 and Manager, Generation Planning, 2001. He took over as Manager of Rates in March 2004 and was subsequently promoted to Director, Rate in February 2008.  In his current role, he is responsible for development and implementation of the state regulatory strategy of the company, which includes maintaining compliance with applicable statutes and regulations at the state and local levels and managing the company’s rates and regulatory function.

Robert received his bachelor's degree in electrical engineering from Rose Hulman Institute of Technology in 1987 and a master of business administration from Indiana University in 1998. He is a registered professional engineer in the Commonwealth of Kentucky and has completed various management programs at the Center for Creative Leadership and London Business School.  He also serves on the Financial Research Institutes Advisory Board and is a member of various professional and industry groups including the EEI Rates and Regulatory Affairs Committee and Southeastern Energy Exchange Rates and Regulation Committee.