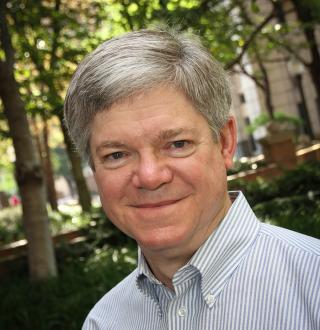 FRI has selected Kenneth A. Colburn as its 2020 Crystal Award recipient.

Most of Colburn’s professional life has been dedicated to advancing public policy at the intersection of energy, environmental and economic opportunity. While at RAP, Colburn pioneered beneficial electrification and energy optimization, spotlighted the need to redefine energy efficiency, identified technical options to address climate risks and sought ways to retool and integrate environmental and utility regulation generally.

Colburn has contributed meaningfully to the public power sector, serving on the board of the National Rural Electric Cooperative Association for six years. He is a frequent speaker for co-op audiences on power sector transformation issues, has written or co-written nearly 50 technical and policy papers, and mentors others in this rapidly changing field.

Colburn joined RAP from Symbiotic Strategies LLC, an independent consultancy engaging on climate change, energy, water and public policy issues at the intersection of environmental and economic opportunity. Previously, he was the executive director of the Northeast States for Coordinated Air Use Management and led the Air Resources Division of the New Hampshire Department of Environmental Services.

Colburn holds a bachelor of science in mathematics from the Massachusetts Institute of Technology and MBA and MEd degrees from the University of New Hampshire.

The FRI Crystal Award was created to recognize an individual who has made outstanding and sustained contributions to the design, implementation or analysis of public utility regulatory policy. The award is presented annually during the FRI Symposium. This year’s official award sponsor is the American Petroleum Institute.