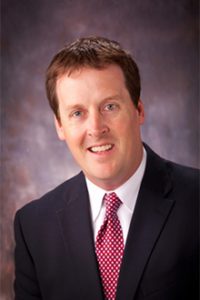 James Owen has served as Executive Director of Renew Missouri since 2017. In that role, James works to ensure the organization’s mission of making Missouri a leading state in clean energy is realized through policy advocacy and formulation, litigation, public education, and general outreach such as lobbying and social media.

In addition to serving as Executive Director of Renew Missouri, James serves as an expert witness before the Missouri Public Service Commission (PSC) as well as administrative tribunals in Kentucky and Kansas. Prior to this role, James was appointed as Public Counsel for Missouri, where he represented ratepayers before the PSC. Before moving to mid-Missouri, James served as an Associate Circuit Judge in Webster County and practiced law in his native southwest Missouri.

James obtained his BA from Drury University in Springfield and obtained his law degree from the University of Kansas. In his spare time, he likes to write and watch movies. Combining these two hobbies, James is the film columnist for The Columbia Daily Tribune and on-air critic for KFRU. He lives in Columbia with his wife, Claire, and their daughter, Cecile.