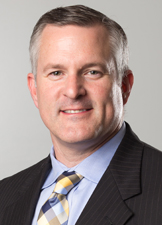 Paul Suskie is the Executive Vice-President of Regulatory Policy, General Counsel, and Corporate Secretary for Southwest Power Pool, Inc. (SPP).  SPP is a non-profit Arkansas corporation designated by the Federal Energy Regulatory Commission (FERC) to serve as the Regional Transmission Organization (RTO) in eleven states.  As an RTO, SPP is mandated by the FERC to ensure reliable supplies of power, adequate transmission infrastructure, and competitive wholesale prices of electricity in eight states. As a part of these mandates, SPP oversaw wholesale energy and transmission markets with transactions totaling $18 billion in 2016.

Prior to joining SPP, Suskie was appointed by Governor Mike Beebe, to the Arkansas Public Service Commission as Chairman and as member of the Governor’s cabinet.  During Suskie’s tenure on the Commission, he served in several leadership roles as a state regulator and was named to Arkansas Business's Top 40 under 40 list of individuals influencing business in Arkansas.

When appointed to the Commission, Suskie was serving in his third elected term as North Little Rock’s City Attorney.  While City Attorney, his office received numerous state and national awards for successfully addressing crime ridden neighborhoods through the use of civil nuisance abatement laws.

Suskie is a graduate of the University of Central Arkansas, the University of Arkansas at Little Rock School of Law, and the Harvard Business School’s Advanced Management Program.  He is a Colonel in the U.S. Army’s JAG Corp that has been appointed as a state military judge and is a veteran of both the wars in Afghanistan and Iraq. In 2005, Suskie served a tour in Afghanistan and in 2008 he served a tour in Iraq with the 39th Infantry Brigade Combat Team.