Written by Elin Swanson Katz, VP of Utilities at Tilson

They say timing is everything, and if a utility broadband project is anywhere on the horizon, now is the time to act.  While the COVID-19 pandemic appears to be winding down, one of the many challenges it has exposed is the number of Americans that do not have access to reliable, affordable high-speed broadband. It has also revealed the profound impact that the lack of access – referred to as the digital divide – has on school children, people working from home, small businesses, medical providers, teachers, virtually every facet of our world.

This has led to a virtual tsunami of state and federal money pouring into broadband infrastructure development and programs to support broadband adoption and affordability.  It has also triggered a reexamination of possible utility roles to support or even provide broadband service.  The Consolidated Appropriations Act of 2021 and the American Rescue Plan (ARP) Act, for example, contain billions of dollars to expand broadband infrastructure, as well as funding for programs to reduce consumer prices and promote digital literacy, as shown in this table from The Brookings Institution. 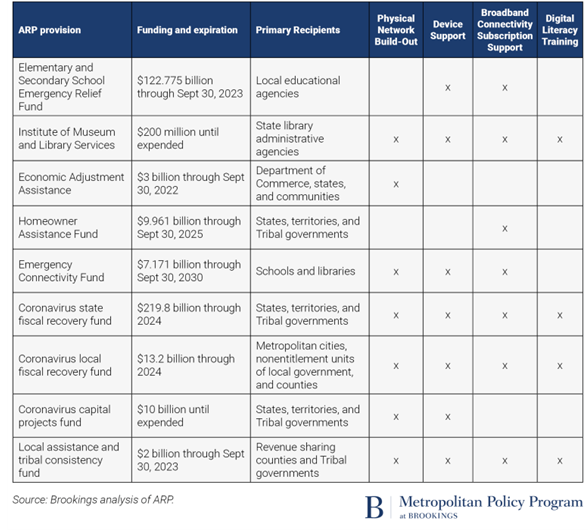 ARP Funding for Broadband Programs (from Adie Tomer and Caroline George, “The American Rescue Plan is the broadband down payment the country needs,” Brookings.edu, June 1, 2021)

While most of these programs are not focused on utilities as the primary recipient, the various funds do create opportunities for creative partnerships with municipalities, local government entities, states, and Tribal governments, as well as Internet Service Providers (ISPs) and other entities.  The Coronavirus Capital Projects Fund (CCPF) within ARP may even create opportunities for utilities as applicants.  The CCPF provides $10 billion in funding to states, territories, and Tribal governments to carry out critical capital projects directly enabling work, education, and health monitoring, including remote options.  According to Treasury guidance, the CCPF’s focus on “the continuing need for connectivity in response to the COVID-19 pandemic complements the broader range of uses, including for broadband infrastructure, of the American Rescue Plan’s separate $350 billion Coronavirus State and Local Fiscal Recovery Funds.”

Under the CCPF, each state will get $100 million plus additional funds based on income demographics and rural percentages.  Applicants for the fund must provide a plan for how they intend to use funds, consistent with ARP and guidance to be issued by Treasury.  Treasury will start accepting applications for review in the summer of 2021.  It is certainly possible that utility projects and partnerships may be eligible to apply if they are centered around critical capital projects.  Indications are that states will have flexibility in the projects they greenlight for CCPF funds, so now is the time to explore the priorities for your state and start discussions about a utility role in broadband deployments.  There is also continued activity in Washington around another large-scale infrastructure bill that would include more broadband funding.

Electric utilities are natural partners in broadband deployment projects.   Electric utilities own the poles and conduit that carry fiber and support other communications infrastructure such as 5G nodes; reach every premises in their territory; have the bucket trucks, line crews, and assets needed to deploy broadband infrastructure; and even have billing systems and customer service operations that are needed to support service offerings.  This does not mean that utilities need to serve as the ISP that provides the hook-up and broadband service to the customer. Rather, utilities have the framework to reduce deployment costs and speed deployment times if they are willing to consider some form of asset sharing and collocation of broadband infrastructure.  Increasingly statehouses, legislatures, and utility commissions are realizing these synergies and turning to utilities for help.

We are also at an inflection point in the industry, where utilities are investing more in communications infrastructure to meet their own needs for distribution automation, AMI, grid modernization, renewable energy, smart community projects, and other developing technologies.  Whether they realize it or not, utilities are evolving rapidly into technology management companies with extensive communication networks, both wired and wireless.  With planning and coordination, these utility investments can support broadband deployment in a way that maximizes the value of investment to the utility, increases the public benefit associated with the investment for the consumer, and helps provide a critical service to customers.  Ubiquitous broadband coverage within a service territory also serves the utility, as connectivity is important for customer equity, distributed energy resource management, and grid transformation.

There has never been a better time for investing in utility broadband projects, as the enormous amount of money coming from the federal government enables projects and partnerships that might otherwise be financially impossible.  For example, some utilities are exploring municipal partnerships, where the utility assists with network deployment by providing timely access to infrastructure, leasing available capacity it has on its fiber assets, working with municipalities on the technical aspects of the project, and generally lending its expertise to cities and towns.  There are successful examples of this utility-municipal partnership in Huntsville, Alabama, and Springfield, Missouri, both of which involved municipal utilities.  However, this model is also generating interest with investor-owned utilities (IOUs), as the once-in-a-lifetime influx of investment dollars should allow these municipal partners to shoulder the cost of these infrastructure projects far beyond what is usually possible for cash-strapped communities which have the great needs.

Other IOUs are working with cooperative partners on broadband deployment.  Many electric cooperatives won federal funding for broadband deployment in the Federal Communication Commission’s Rural Digital Opportunity Fund (RDOF) auction last fall and may also be eligible for ARP funding.   In Virginia, Dominion Energy is installing fiber in rural areas as it works to transform Virginia’s energy grid.  The company is leasing some of that fiber capacity to a subsidiary of Prince George Electric Cooperative, RURALBAND, an electric cooperative adjacent to Dominion’s service territory.  That arrangement reduces the deployment cost for RURALBAND and helps provide a return on Dominion’s investment.  It’s a win-win-win for customers, the ISP, and the utilities.

More ISP partnerships are also developing to deliver broadband service to underserved customers.  For example, in Vermont, fiber leases and swaps between VELCO, the state’s statewide high-voltage transmission operator, and Tilson Broadband, an ISP, are enabling a fiber-based, gigabit speed network deployment in rural parts of the state that was funded in part by federal dollars.  So utilities have a very real opportunity to stretch the impact of public money by working with ISPs and leasing available fiber capacity for use as “middle mile” broadband transport.

This is the Golden Age of utility broadband.  Utilities are investing networks for grid modernization, consumers are demanding universal access to broadband, and the federal government is providing billions of dollars to build networks.  With some near-term action and thoughtful planning, the utility sector can be a major catalyst for closing the digital divide while also accomplishing its own goals and protecting customer investment.  It is another way to demonstrate the public service orientation of our nation’s utility companies.

Elin Swanson Katz is VP of Utilities at Tilson and a member of the FRI Advisory Board.  She is also the former Consumer Counsel for the State of Connecticut and the former President of the National Association of State Utility Consumer Advocates. POV pieces are the opinion of the author and do not necessarily reflect an official position of FRI or the University of Missouri.