Written by Joseph Fiordaliso, President of the New Jersey Board of Public Utilities. Direct questions to Ryann Reagan and Joseph DeLosa on the NJBPU staff. 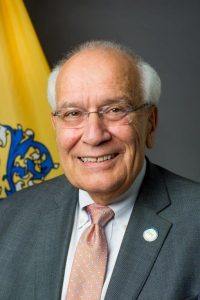 What prompted this bold move?

In New Jersey and other Mid-Atlantic states, the transmission planning process is based on a detailed set of rules, approved by the Federal Energy Regulatory Commission (“FERC”) and implemented by the regional grid operator PJM Interconnection (“PJM”). These rules determine how and when to expand and enhance the regional grid, and outline a highly competitive, robust procurement structure to select which projects get built. The SAA is a never-before utilized tool in PJM’s rules, designed to allow the transmission development necessary to satisfy the diverse policy goals that exist among PJM states. Use of PJM’s existing competitive procurement model, through the SAA, will accomplish New Jersey’s goal of seeking the most cost-effective option to integrate our offshore wind targets, while limiting environmental impacts. In November of 2020, NJBPU directed Staff to collaborate with PJM to solicit options under PJM’s SAA.

On April 15, 2021, PJM opened the SAA solicitation window for developers to submit potential transmission solutions to the NJBPU’s request to deliver offshore wind energy to the state’s electricity grid. The solicitation window is anticipated to close in mid-September, 2021. Once bids are received, the NJBPU, working with PJM, will evaluate the project proposals to determine which, if any, combination can meet New Jersey’s offshore wind policy goals.

Transmission is a hot topic these days.  What exactly is it?

There are a lot of acronyms.  What is a Regional Transmission Expansion Plan (RTEP)?

PJM performs the RTEP to identify system upgrades and improvements needed to maintain reliable, economic, and secure operations. There are specific rules governing the preparation and development of the RTEP, regulated by FERC. The RTEP also includes a robust competitive procurement structure used by PJM to procure the most efficient or cost-effective regional transmission project to solve a system need.

What is the State Agreement Approach?

The SAA is a tool offered by PJM for its member states to request transmission development needs, based on policy requirements, that PJM will incorporate in the RTEP process. The SAA was established by the FERC Order No. 1000, issued in 2011, which also initiated PJM’s competitive procurement of transmission solutions.  The SAA utilizes the RTEP’s existing procurement framework to solicit efficient, ready-to-build transmission options that seek to meet New Jersey’s public policy requirements. New Jersey is the first state to utilize the SAA. This process capitalizes on the power of PJM’s existing transmission procurement framework to identify and consider the most economic, efficient, and environmentally friendly transmission solutions available.

What do each of the four solicitation components request from developers?

The SAA solicitation identifies four interrelated components of an open access offshore wind transmission facility that may be part of an optimal solution. The first component (“Option 1a”) focuses on potential upgrades to the existing grid that may be necessary for offshore wind energy injections. Staff and PJM conducted an analysis, prior to releasing the solicitation, which identified four default injection locations, on the onshore grid, for the interconnection of potential solutions. Developers retain flexibility to propose alternate interconnection locations if they identify more beneficial interconnection locations. The second component (“Option 1b”) requests developers to submit proposals for extending the onshore transmission grid closer to the shore, creating so-called “power corridors.” These corridors would serve to extend the onshore high-voltage transmission system closer to the shoreline, providing planned landfall locations to optimize efficiency and minimize environmental disturbances. The third component (“Option 2”) extends the power corridor concept into the water, providing a potential interconnection location for offshore wind that is closer to the turbines. The fourth component (“Option 3”) requests developers to submit proposals for possible interconnections between offshore substations, referred to as an offshore transmission “backbone.”  Option 3 proposals allow developers to demonstrate the benefits of a networked grid that may connect various lease areas or other offshore transmission infrastructure.

What does the SAA guarantee for the state and what has New Jersey committed to thus far in the process?

By initiating a competitive solicitation for transmission projects from a broad pool of regional developers, NJBPU is ensuring that New Jersey can select from the most efficient and effective options available on the market in pursuit of a coordinated transmission solution for delivering offshore wind. PJM’s robust competitive bidding process forces developers to propose lower costs and innovative proposals resulting in efficiencies and ratepayer savings. Opening the proposal window to all qualified PJM developers will allow for a diversity of approaches and expertise that will identify an optimal grid with high benefits and low environmental impact. At this point in the process, there are no financial or ratepayer obligations. Under the SAA, the NJBPU is the ultimate decision-maker, deciding which, if any, of the proposals proceed to construction. These projects are not likely to be pursued if they do not result in development of a lower cost, lower risk, or higher benefit option for the interconnection and delivery of New Jersey’s offshore wind. Upon receipt of the proposals, NJBPU Staff may decide to terminate the SAA process, if it is in the best interest of the State. NJBPU Staff continues to work with PJM to develop adequate ratepayer protections should any transmission project eventually be selected through the SAA.

Is it likely other states will use the State Agreement Approach to assist in offshore wind build out?

No other state has yet taken advantage of the ability to work with PJM to implement public policy needs through the SAA. New Jersey is the first state to pursue independent transmission development for offshore wind, while other states (such as Texas and California) have pursued coordinated transmission for other types of preferred generation resources. Other states in the Mid-Atlantic may not have sufficiently large offshore wind goals to achieve benefits of scale associated with a coordinated approach to transmission. In addition to the SAA, New Jersey has positioned itself to be a leader in Offshore Wind, including the award of three large-scale offshore wind farm projects and robust commitments to develop an offshore wind supply hub and workforce. Pursuing the SAA is not an easy commitment; each state will decide for itself whether its own clean energy or public policy goals suggest substantial benefits from regional transmission coordination. Ideally, PJM’s transmission planning process will continue to evolve to proactively plan a regionally optimal grid of the future.

Joseph Fiordaliso is President of the NJ Board of Public Utilities. He was first appointed to the Commission in 2006 and was appointed President in 2018. The NJ Board of Public Utilities has a seat on the FRI Advisory Board.  POV pieces are the opinion of the author and do not necessarily reflect an official position of FRI or the University of Missouri.